Written By John E Hoyt, w/ other relative's input
Family Historian and Genealogist,
"a legacy for your family" 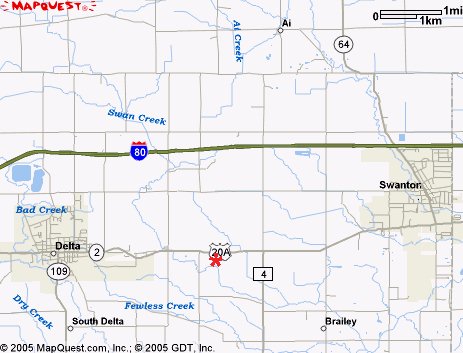 My Grandpa & Grandpa Mericle’s farm was about 1 to ½ hours drive from Clinton, to their farm, East of Swanton, OH, off US 20. As you can see by the left photo, that the farm buildings off the road, was large white barn to the West, and a 2 story farm home to the East. An apple orchard was West of the white barn. A chicken coop, about 40’ long was between and setback from the House to the Barn, and the entry drive came by the barn, and also continued past the barn & chicken coop to the fields for the tractors and equipment used for farming, with a large gate to the fields. Vegetable patch was behind the home on the other side of the farm homes back yard, along with the standing outhouse, at rear of lawn behind the home, along a white picket fence that went from road on east side of the farm house, around the rear yard of the farm house. The outhouse was used, until indoor plumbing was installed in the 1960’s. Bushes line the drive-way lay West of the Barn & West of the house. A big tree was out front by the drive-way and overhung the paved US 20 road, we climbed this many times when we were near teens. Other large trees, towered East along the white picket fence line of the farm home, another tree was near the driveway close to the pathway to the farm home entry in the back. The front door & porch were seldom used. The Blueberry & Blackbaerry patches were in and beyond the East fence line, nad enjoyed by all us kids.. Swan Creek, meandered the back of the farm house, back of the yard & fences.

INSIDE THE BARN & FARM HOME:

The Barn was huge to us little boys and girls. The farm & equipment was strange and noisy. The big doors in the middle of the barn from the driveway were heavy, and hard to move on the roller rails at the top of the doors. The smell was like any other barn, hay, steamy, dusty, urine of cows and horses. As you entered from the East doors, the hayloft was too the left & right, on second floor, and the cows and horses were stabled underneath the back of the barn. The southern section was where the horse was kept. The horse name I can't remember, maybe Helena would recall nmae.. To the right was the equipment storage area. A small building sat along the back line between house & barn, called the Wind Mill & pump house for all watering, in the barn for animals and the house, pump and the yard watering during the Summertime..

The farm house is a big regular framed 2 story 1900’s building, with Victorian features on outside on porch and the window frames. The house had a kitchen on the east end. Grandma would burn papers for heat and hot water. The middle section was the dinning room and the lower North-West section was the TV room where Grandma Mericle watched the tigers play baseball. The South-West room was their bedroom. The bathroom was off the dining room on the south side. The walls were wallpapered with old flower & striped vanilla & pinkish wall coverings in all the rooms. The upstairs had Helena's bedroom and a spare bedroom. An attic door was from the South-West corner, and once, Grandma, showed us some old stuff that was stored there.

I remember seeing a lot of relatives come to the Mericle Farm for Family Gatherings. Thye were usually fun, and had other kids our age to play with, whether it was Cousin Loralee, or Terry Deal, or others. Us kids, while the parents were usually busy carrying food to the tables, and sitting in the muti-colored & striped, cloth covered, folding wood, framed yard chairs, played yard games, read comic books, discovered stuff on the farm, went to fence for raspberries, or the garden, or trees to climb. Watermelon, jello's, chciken, meats, yams, baked beans, potatoe salads were the usual fair. We were not allowed to go into the Barn without parents watching until we were teens, but it was nice to see relatives, Cousins, Aunts & Uncles nearly everytime we visited. I highly, value, all those Family Get-togethers, while we were small & teens. After JD Mericle passed on Oct. 26, 1956, at Waseon Hospital, Waseon, OH, and then his wife, Cora, our grandmother, became to ill to handle farm, early in the 1970's. They sold it off, and Grandmother came to live with us, as well as, grandmother going out to Aunt Helena in AZ, until she passed away Dec. 3rd, 1976 at Eventide Nursing Home, Durango, AZ. They are both buried.at Walnut Grove Cem. Section; Chapel, Liberty Twp., Delphos, Allen Co., OH. During Winter months in the 1950's, JD & Cora Mericle operated a Restaurant in Picacho, AZ called the Mericle Grill. JD & Cora ran a couple of restaurants through their lives in several communitees, and Belleville, MI, before purchasing the farm in late 1940's.


would bring us kids to Grandma's and leave us twins, and/or Jim, for a week. Us kids usually slept in the spare bedroom in the


South-West corner. We helped her with chores, and indeed, loved us all, so very much. She did not have to get


after us, as we usually behaved, as it was a great vacation and adventure to be there, for those few days out of the Summer months.

Playing in the barn: of course, playing, Commando Cody, Superman, Batman, and making huts in & between the hay bales was great fun, but dangerous. I didn’t last long in the barn, as my severe Hay Fever would kick in, so an hour or 2, was the maximum. I was mostly afraid of the cows, steers or horses, but once in a while, grandpa, would place us kids, on the horses, and ride us around, or maybe a ride on the tractors through the years was great fun and enjoyment.

Feeding the chickens: This was a daily chore and also fun to watch the chickens, pluck feed and pick at the ground.

The Out-House: This was a challenge for me, as I didn’t like the dark and the smell, and I was scared of bumble-bees coming into the outhouse, when I was going. In and out as soon as I could.

Picking Vegetables & Berries: This was sometimes a chore, and sometimes fun to do with my brothers & relatives, like Loralee, picking Raspberries our cereal and treats in the afternoon, with Milk, and picking out the vegetables with Grandma &/or Grandpa was fun too. Sometimes, us boys, as teenagers, would eat the vegetables right out of the ground. Planting always fun, and watching them grow as time went on during the summer. Grandma had her flowers along the white picket fence, too.

Train Sounds at night – Every night the big long train, usually heading East from the West, North of the farm & US 20, about ½ mile away from the farm across the road. You could hear the Blowing Horns from it in Delfield’s village crossing, and it kept getting louder & louder, and before it went by, it sounded close enough to be afraid of it, but when we were awakened and you could see the white dissipating light in front of the train, and the white-grayish smoke coming from the front of the train, and trailing it for a long many boxcars and oil tanker cars. The first night was hard to get to sleep after

Playtime – Listening to the Radio, watching TV, Lawrence Welk, Mighty Mouse on Saturdays, playing cards, like solitaire, was one, with Grandma, picking vegetables, & berries was another, looking at Arizona Highway Magazines, orchard apple gathering & climbing the trees, feeding the chickens, sometimes walked the barn road to the 2 track road back to the fields & ditch.

Learning about Petrified Wood and Arizona: I was amazed one day, when they told me that a rock in Grandpa’s & Grandma’s dining room was a piece of heavy wood that was a actually, a heavy rock. It rested a rock that was wood at one time. This was one of the times that I became intensely interested in Arizona and the West, and Geology, besides my father, whom had taken us to oil wells near Clinton, and watched as the dirty well drillers, the mud ponds, the sands. Dad & drillers look in and feel the small grout bags lined the well housing, truck & walls. I wonder what happened to that, Petrified Wood, piece, about 6” round, as it was used as a door stop in the dining room to the kitchen for the swinging door.

Massaging Grandma’s tired feet in evenings while watching Tiger Baseball was a ritual.

I recall that Grandma always seemed to have fresh baked pies and cookies. Yummmm! I recall playing with the old crank telephone on the wall in the kitchen.

I remember how weird it was not to have any bath or shower in the bathroom.

I remember looking over the items on Grandma's dresser. There was always a box of Coty face powder which I use myself today!

It seems like Aunt Iva and Grandmas always had their crossword puzzles going in the dining room and there was always some maple nut candies or orange slices setting about to eat.

Grandma would take me upstairs and show me all of the pretty flower sack fabrics she had and she always let me have some as she knew I loved to sew.

I remember the time it got so hot that the rear window of the (current ) Kaiser Daddy was driving actually shattered. That was pretty weird.

The barn was moved about 4” off it’s foundations in a 1960’s wind storm, but wasn’t harmed, except for a few shingles.

The barn was removed in the 1970’s. The house lost it’s old porch in the 1960’s, and just a cement poured platform with no roof, was used the last time we were there, and it was painted a brick burnt orange for many years. (See picture right below, as I visited the Farm, in the early 1980’s, and took a couple of pictures)

`Thank You for your interest.
Family Historian and Genealogist
Website: http://www.johnhoyt.com
E-mail: jeh49341@chartermi.com