Back to The SIMON HOYT HOMEPAGE

About The New "BUSH" English Hoyt Research of 1995

& Some Early HOYT's in America

Simon Hoyt appears on a list, with Nicholas Stowers and the Sprague family, of those who were the first to live in Charlestown in the Massachusetts Bay Colony.20 The date given for the list, which appears in the town records, is 1628, but scholars are confident that the document was made somewhat later, maybe Summer/Fall 1629. The so-called Higginson Fleet of ships that sailed in the Spring and Summer of 1629 carried some if not most of the people named on that list. A statement has been proliferated that the Hoyts came over on the ship Abigail in 1628. There is no extant list of passengers on that trip of Abigail nor any other evidence to specifically place the Hoyts on it.
"Simon Hoytt" is on a list of "Names of such as tooke the Oath of Freemen" of the colony, dated 18 May 1631.21 The earliest freeman lists don't specify place of residence. On 3 April 1633 Dorchester town records state that a double-rail fence with mortices in the posts was ordered to be put up by the cow-owners of the town, 20 feet of length per cow. Simon's fencing was to be 40 feet.22 On 8 October of the same year he was appointed a fenceviewer for the "east field."23 On 6 January of the following year he was included in a division of "marsh and swamp."24 He was elected a fenceviewer for the "north field" on 24 May 1634.25 On 2 June he was in another division of marsh and swamp, a parcel of about 8 acres on the north side of the "neck." On 10 February 1634/35 he was ordered to keep one bull with the heifers on the "neck of land," for which he was to be paid.26 This action surely was taken to make calves and that Simon was to oversee the process. The last mention of Simon as a Dorchester resident was on 17 February 16(34/?)35, when it was ordered that "the lott of medow that was Symon Hoytes next to boston side Joyning to John Witchfield shall be devided betwixt Mr. Rodger Williams and Gyles Gibbes."27
Simon and his family moved to Scituate, Massachusetts, by the time he and his wife joined the church there on 17 April 1635.28 Given the last two references to Simon in the Dorchester town records, the move can be placed between 10 February (perhaps 17 February) and 17 April 1635. Rev. Lothrop of Scituate listed the house lots and their occupants from the time he arrived in September of 1634 to December? of 1636, the month being unclear.29 Simon had a house lot there between those dates. Dean's history of Scituate indicates that "Goodman Hoyt" was granted land in the "Greenfield" section of Scituate between April? and June? of 1635, although it is not clearly stated and there are no sources cited in this work.30 However, given all this evidence it is reasonable to say that the Hoyts moved to Scituate in late Winter of 1635 and had established themselves sufficiently enough to join the church and build or buy a house there within the next 4 months.
The time of Simon's removal to Windsor, Connecticut, is not known, but speculated to have been between 1636 and 1639, when groups of settlers from Massachusetts Bay went there. He apparently does not appear in Scituate town and church records after 1635-1636. In 1677 Matthew Grant made a list of church records, apparently abstracted, that include the death of "Old Goode Hoyt" in 1644 and says there were 2 children born to Simon in Windsor.31 The latter wasn't a church record - the Hoyt's didn't join the Windsor church and their are no baptisms there for their children. This suggests that the Hoyts moved to Windsor with the 1639 party headed by Rev. Huit. He was surely there by 7 May 1640, when the Particular Court of Connecticut ordered that "Simon Hoyette and his ffamily are to be freed fro watch & ward untill there be further order taken by the courte."32 The reason for this may be found in where Simon was granted land in Windsor. He appears in an inventory of land ownership dated 28 February 1640/41.33 He had been granted "fourscore" acres of upland and meadow on the north side of the "rivulet," with 30 acres of the latter designated for his son Walter. A copy of this record describes the property as being on the side of the "rivulet" (Farmington River). Both are correct. 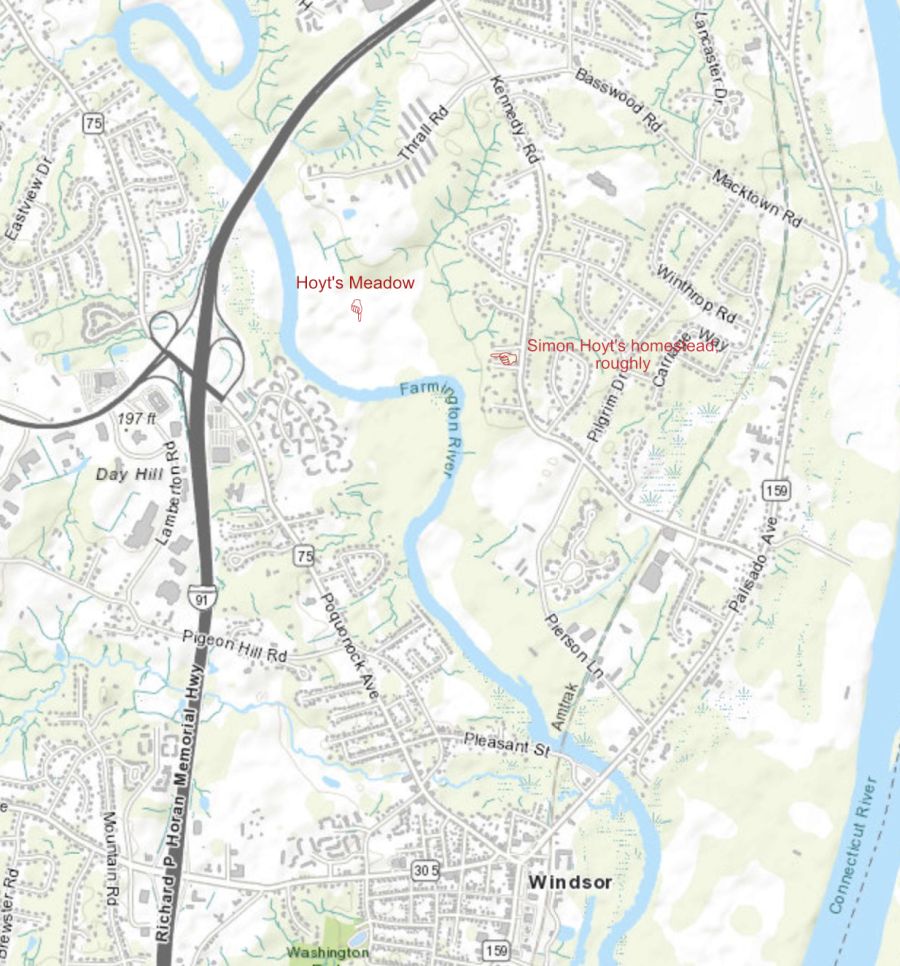 According to a reconstructed plan of Windsor home lots and roads in the 1640s and 50s, Peirson Lane and Kennedy Road were part of that early plan. (see note #)

This area became known as Hoyt's Meadow and was enough distant from the main settlement known as the Palisado to excuse Simon and Walter from guard duty. "Old Goode Hoyt" is on a list of deaths in 1644, A record of January 1659/60 says he had a "long seat" in the Windsor church, for which he paid 6 shillings.34 He had died in Stamford, Connecticut, by this time. The record refers to pews associated with homesteads and their original owners, although the latter are not named, and Simon was likely among them.
Simon supposedly sold his land in Windsor in 1646.35 He supposedly was granted a homestead of 2 1/2 acres bordering the common in Fairfield, Connecticut, and 5 acres there at "Sascoe Neck" called "Hoit's Island." That would probably have been a high section of salt marsh along the Pine Creek flood plain just west of the center of the village. It appears this land is listed in an inventory for the town of Fairfield dated 6 March 16(48/49?), but I've not been able to find specifics about it.36 (for references to Simon's holdings in Fairfield see Elizabeth Hubbell Schenck, History of Fairfield, Fairfield County, Connecticut, vol. 1 (New York:1889), 45, 64, 375, 419.
This puts his move from Windsor about 1646-1648. As a resident of Stamford, he bought the Fairfield homestead of John Green on 4 March 1650/51, but seems to have sold that soon after. A reconstruction map of early lots in Fairfield puts Simon's homestead grant on what is now Rt. 1 (Post Road) just west of Old Post Road. Sasco Neck is in the southwestern corner of the town, starting, roughly, just southwest of that spot. John Green's lot in 1651 is about where the Fairfield Public Library is at the corner of Post and Old Post Roads. 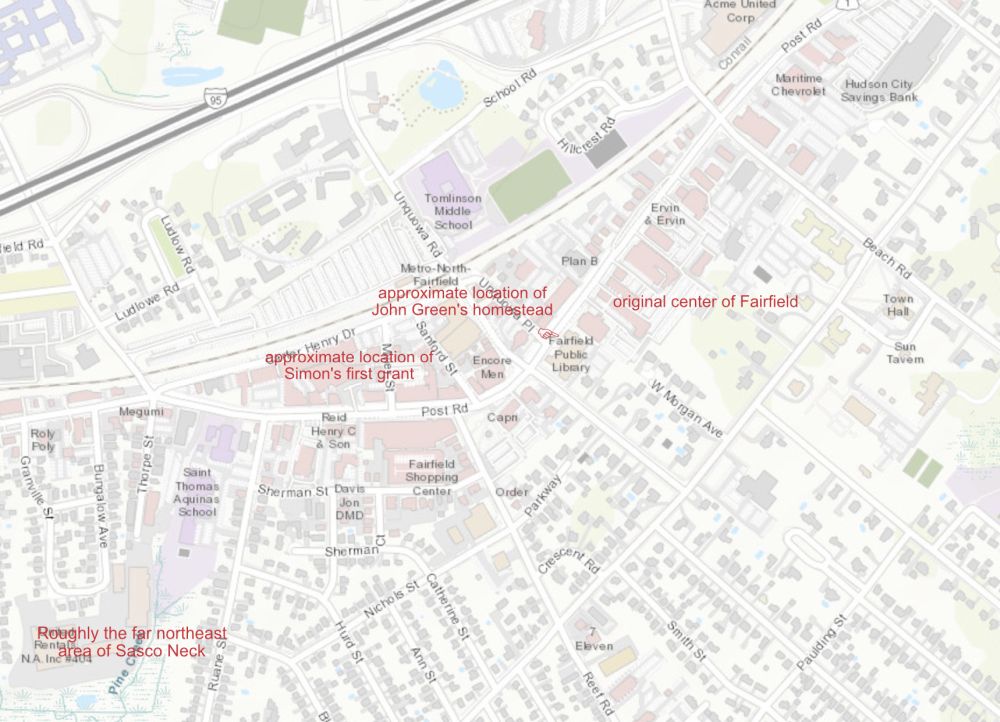 Simon's death is recorded in the Stamford town records as having occurred on the 1st day of the 7th month 1657, translating to 1 September 1657.37 An inventory of his estate was taken on 9 October 1657. This Fairfield Co. probate item is given here as it was transcribed for David Hoyt's book. It is described as being in among the town records, worn and partially torn.

Several receipts are said to have been in Simon's probate file for the distribution of his estate.38 They refer to Joshua Hoyt receiving portions from his brothers Moses (2 April 1666), Samuel (April 1665) and Benjamin. Samuel Finch, on behalf of his wife, received their portion in April 1665 and Samuel Firman gave his portion to his mother-in-law on 25 March 1662. Other receipts are probably missing, but the signature of "Joen" Hoyt can be found as witness to Moses' signature. The John Hoyt who witnessed Moses' signature could have been Simon's son or grandson. Other records in Stamford need to be researched.
It is clear that Simon's children were by two wives. There is no primary evidence found identifying the family name of his second wife Susannah. There is a record made by Rev. John Lothrop of Scituate apparently in 1637 that lists the houses by heads of household of that town since his arrival in 1634. There is an entry for "The Smiths. Goodman Haits brother." No other entry is prefaced by "the," such as "the Hoyts." All the households except 3, including "The Smiths," are numbered, which may indicate those three were not land owners. Without more evidence, it can only be said that she may have been named Smith. Susannah and her heirs (among whom are not the English-born children of Simon) are named in an agreement regarding the distribution of her estate. At the time of her death she was Susannah Bates, probably the wife of Robert Bates of Stamford. Her heirs were her children Moses, Joshua, Samuel and Benjamin Hoyt, and the husbands of her daughters Mary, Sarah and Miriam (namely Thomas Lyon, Samuel Finch and Samuel "ffirman").39 The inventory was presented at court on 24 May 1659.

child of Simon? perhaps out of wedlock:40

Baptisms for children of Simon in West Hatch and Broadwinsor:

children of Simon and Susannah: