Simon Hoyt and his "Wanderlust"

(Simon Hoyt is listed on the middle panel)

The Winthrope Fleet of 1630 - Book online

Lyon's Whelp, the Mayflower and the Talbot, arriving in Salem late May or June 1629.

down 7 generations to our

for Immigrants Arriving by Sail or Steam

The Lyon's Whelp left the Thames, Gravesend, England April 5, 1629 along with five other ships, George Bonaventure,

(Appears on the passenger list of The Lyon's Whelp, 1629 Listed as a Planter with the Winthrop Society)

(Have information on Ralph Sprague, wife, children & 2 brothers. I live 3 towns away from Malden, Massachusetts & have a lot of hard copy material I'm willing to share. The family did come from England on the Lyon's Whelp. I have a hard copy of the passenger list from the ship & willing to share. Have 2 friends that are from the Bartlett family or connected the Barlett family in Plymouth that are related to 1 of Ralph's brother's. Willing to have them contact anyone to share information.)

came to Salem, Mass., from Somersetshire, England on the ship Lions Whelp, which sailed from Gravesend April 25, 1629 with about 40 planters out of the counties of Dorset & Somerset. He arrived at Salem, Mass. in mid-July. Hugh came under the name of Hugh Tillie, bound for Salem. He moved from Salem to Yarmouth in 1639.

He moved to help settle towns of Dorchester and Scituate, MA, Windsor and Fairfield, CT, and finally Stamford, CT.

Walter Palmer became very prominent in the affairs of Charlestown, holding public office and is listed among the first group of men who took the Oath of Freemen on May 18, 1631. The original list included, "Mr. Roger Conant, John Balche, Ralfe Sprage, Simon Hoyte, Rick: Sprage, Walt (Walter) Palmer, Abraham Palmer, Mr Rich: Saltonstall, Rich: Stower, Czekiell Richardson, Wm Cheesebrough. Walter was married for a second time to Rebecca Short of Roxbury on June 1, 1633. They were married in Roxbury Church, of which she was a member and Rev. John Eliot its Minister. She was one of the first members of his church upon her arrival in America in 1632. Roxbury was generally settled by the people from Essex and Hertfordshire under the leadership of the Rev. John Eliot who had been the Vicar of Nazeing. Reverend Eliot's records of the Roxbury First Church state: "Rebeckah Short, a maide srvant, she came in the yeare 1632 and was married to Walter Palmer a Godly man of Charlestown Church." Rebecca was to give birth to seven additional children giving Walter a total of twelve. 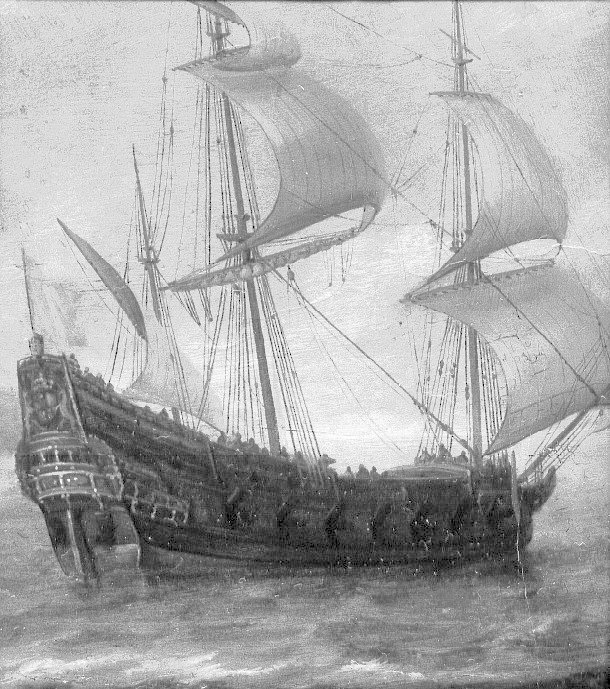 The Lion's Whelp of 1628 was built at the Duke of Buckingham's expense by William Castell of St. Saviour's, Southwark in 1628 and was used to prey on French shipping (with the proceeds going to the Duke's war-chest) before joining the rest of the English fleet for the final attempt to relieve the siege of La Rochelle. She was taken into the Royal Navy after the Duke was assassinated and in 1632 the Crown reimbursed his estate.

Lion's Whelp was a three-masted pinnace of about 140 tons, having one gun deck with a grating or flying deck over the waist and eight broadside gun ports. She was equipped with sweeps (3-man oars, like a galley) and was part of a line of auxiliary-oared warships running from Henry VIII's time to the "Galley Frigates" of Charles II's reign.

http://www.stoningtonhistory.org/archiv4.htm A Good History of the Early Settlers of these towns.

(Another proof that Susannah, was a, Smith, marriage to Simon Hoyt/Haite, and that her father, Richard Smith, died in Wethersfield, CT after 1669)

HOYT DNA
NEWS FLASH- Recent DNA test results of the John Hoyt lineage and the Simon Hoyt Lineage
of the HHH Book by David W. Webster of 1871, are NOT RELATED
--> (more tests to be done, read below, or go to HOYT-DNA PAGE)

OTHER LINKS FOR RESEARCH

(But, Most Vital Records are of the John Hoyt Branch, Salisbury, Amesbury)

On BURIAL SPOT for SIMON HOYTE

From: Historian, Stamford Historical Society
To: John E Hoyt
Sent: Thursday, April 16, 2009 4:01 PM
Subject: Re: Oldest Cemetery of 1600's
Mr. Hoyt: Unfortunately, there is only one known 17th century gravesite, for Rev. John Bishop.
There are no other known cemeteries or gravesite for early graves. Sorry we cannot be of help.
Grace Bounty

(See the Pioneer Memorial image picture, at top of Page.)

To join and be a member of this special old Towne: